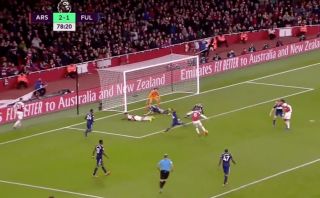 Aaron Ramsey got his name on the scoresheet for Arsenal this afternoon, as the midfielder bagged against Fulham just minutes after coming on to the pitch.

Having just been brought on to replace Alexandre Lacazette, Ramsey managed to find the back of the net to put the Gunners 3-1 up after he tucked the ball home on the rebound following an attempt from Pierre-Emerick Aubameyang.

The goal all but wraps up the win for Unai Emery’s side, who look set to go just 2 points behind Chelsea by securing all three points today.

You can see the goal below. Instant impact from the Welshman!

Goal Arsenal, Aaron Ramsey with a cracking finish into the top corner to make it 3-1 Arsenal and game over! pic.twitter.com/5wJy3DDRvT