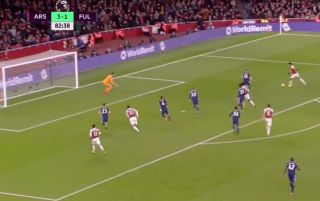 Pierre-Emerick Aubameyang got his name on the scoresheet for Arsenal this afternoon to wrap up the win for the Gunners in their clash vs Fulham.

The Gabon international found the net just a few minutes from time, after he was played in Sokratis just inside the penalty box before firing home with his right foot to put Arsenal 4-1 up.

Arsenal have effectively wrapped up all three points with that goal, something that means they’re now just 2 points behind Chelsea in the race for the top four.

You can see Aubameyang’s goal below. Decent finish from the lad, even if it did take a deflection!

With this strike, Aubameyang reclaims his spot as the Premier League’s top scorer! #Arsenal pic.twitter.com/1uTcQeNpLA