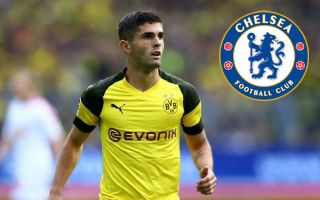 Chelsea striker Michy Batshuayi has cheekily hinted that he deserves some credit for today’s completed transfer of Christian Pulisic.

The pair spent some time together at Borussia Dortmund last season, when the Blues loaned Batshuayi to the Bundesliga giants in the second half of the campaign.

MORE: What Christian Pulisic said about Chelsea in his first words since €64m move confirmed

A deal taking Pulisic to Chelsea in the summer was announced today, and Batshuayi has posted this picture on Instagram to celebrate.

In doing so, the Belgium international included the hash tag #AgentMichy in his caption, suggesting he may have been able to persuade the player when they played together.

We’ll never know for sure, probably, but Batshuayi definitely seems the type to get himself involved.

He might not have done much on the pitch for Chelsea, but Blues fans can perhaps thank him for his role in this signing going through!