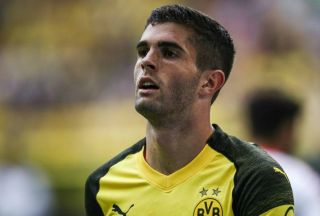 Chelsea have secured the signing of Christian Pulisic from Borussia Dortmund in a deal worth €64m, and Liverpool fans have had their say on the transfer.

As per Dortmund’s tweet below, they have confirmed the deal and the fee involved, while Pulisic will remain with the Bundesliga giants until the end of the season on loan from the Blues.

Borussia Dortmund has agreed with @ChelseaFC on the transfer of Christian Pulisic for a fee of €64 million ?

Pulisic will remain at BVB on loan until the end of the season. pic.twitter.com/jAur5xWwuQ

However, as noted by the Telegraph, Liverpool were also heavily linked with launching a bid for the 20-year-old, with Jurgen Klopp previously working with him during his time in charge of Dortmund.

With that in mind, the Reds have seemingly missed out to their Premier League rivals and will now perhaps look elsewhere to help bolster their attacking options.

Nevertheless, based on the reaction below from many of their supporters, it seems as though most of them are pleased not to have splashed out such a hefty fee for Pulisic, with many arguing that the USA international is perhaps overrated.

With 10 goals and 13 assists in 81 Bundesliga appearances coupled with nine goals in 23 caps for the USA, it would appear as though Pulisic does indeed have a bright future ahead of him for club and country.

However, he has yet to prove himself at the highest level on a consistent basis, and so there are certainly two sides to the argument.

Whether it’s sour grapes on missing out or genuine delight that they haven’t spent so much on a largely unproven talent, there seems to be a general feeling amongst these Liverpool fans at least that there is no real regret over Chelsea landing Pulisic ahead of them.

Further, and perhaps more intriguingly, the general consensus is that if the Liverpool hierarchy really wanted Pulisic, they would have landed his signature. Instead, many fans are choosing to believe in Klopp’s decision making and track record thus far and have full faith that the Reds boss has made the right choice.

Delighted, guy is so overrated

Hes a decent player but there are better players out there, would rather sign Werner or Fekir over him imo

Not bothered. Wouldn’t get in the squad. Wilson to come back in summer. 58m saved.

Not arsed. Hopefully been bought to replace Hazard, and not in his league

Not arsed. Sooner see Wilson and some of the younger prospects be given a shot in the first team than spending that kind of money not in a position of need.

Understandable why we pulled out at that price

couldnt care less. i mean, will be fine with whoever Klopp wants.

Ask yourself, Who does he displace in the Liverpool 11? There’s your answer as to why he hasn’t signed for Liverpool

Think it means Hazard is going abroad so absolutely delighted.

If we wanted him,we would have got him. And if Klopp has other ideas, we fans should be just happy with it, given his record in buys and sells.

Still don’t understand the hype around this kid.
Sancho has done more in less time