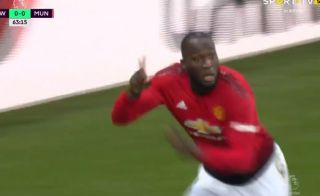 Manchester United have finally broken through against Newcastle with a goal from substitute Romelu Lukaku at St James’ Park.

Marcus Rashford tried his luck from a free-kick which was spilled by the Newcastle goalkeeper, and Lukaku made no mistake as he raced onto the rebound.

MORE: Video: Manchester United’s Anthony Martial nearly gets his head smacked off by the ball against Newcastle

Having come on as a sub, the Belgium international scored with his first touch of the game – something his manager Ole Gunnar Solskjaer was renowned for during his playing days.

Not content with being a super sub himself, Solskjaer has now turned Romelu Lukaku into one within a couple of weeks.

Another substitute goal from Lukaku, clearly he has been learning from Solskjaer. #MUFC

The Norwegian was a legendary super-sub for the Red Devils and is now making a fine start to life in management at Old Trafford after coming in as interim manager until the end of this season.

If the score stays like this Solskjaer will make it four wins out of four in the United hot seat.