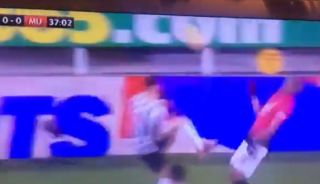 You may have seen this Anthony Martial video doing the rounds tonight from Manchester United’s game at Newcastle.

It really is absolutely brutal, with the France international getting the ball smacked right into his face from close range.

It genuinely almost looks like enough to knock the player’s head off, but thankfully he seems to be fine.

Let’s hope Martial can play at his best in the second half after some real signs of improvement for the Red Devils this season.