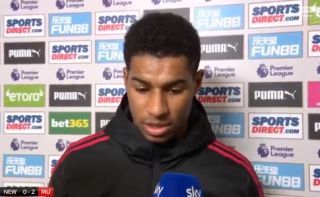 The pair spoke to Sky Sports after both scoring in the win over Newcastle this evening, which made it four out of four for Solskjaer – equalling a long-standing club record.

Speaking about the Norwegian’s influence, Lukaku admitted it’s ‘totally different’ having a former striker as their coach, saying he and Rashford have benefited from it.

Rashford also said that while he and Solskjaer had not yet started special training work on his finishing, the manager’s words have helped him so far.

With every passing game, United’s decision to axe Mourinho and bring in Solskjaer looks more and more of a masterstroke.

Can the 45-year-old possibly get the job permanently after the end of this season?