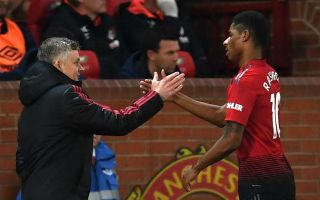 Did you notice anything interesting about the Marcus Rashford goal for Manchester United vs Newcastle this evening?

In the build-up to this week’s match, United interim manager Ole Gunnar Solskjaer spoke about Rashford’s finishing and offered some useful words of advice.

A legendary striker himself in his playing days for the Red Devils, the Norwegian tactician clearly has plenty of wisdom to pass on, and it seems to have worked a treat.

Just a few days before Rashford’s cool finish against Newcastle, Solskjaer spoke of how the England international could do with just passing the ball into the net and essentially telling him to keep more of a cool head in those one-on-one situations.

‘Maybe I can give him a little bit of the nous that I had inside the box. I’m talking about the little moves you make to get free, that little bit of calmness in front of goal,’ Solskjaer is quoted in the National.

‘Marcus is 21. He’s still learning. The most important thing I can see is to just settle him down in front of goal.

‘I’ve seen him rush a few finishes. He thinks “I’ve got to get a shot off early” when sometimes you just pass it past the keeper. I always say that the goal never moves.’

Well, it worked a charm, with Rashford doing just that as he rolled the ball in from close range after being put through by a clever pass from Alexis Sanchez.

United fans noticed the quality of the 21-year-old’s finish, and will be understandably delighted at their new manager having so much influence.

Solskjær on Rashford: “I’ve seen him rush a few finishes. He thinks, ‘I’ve got to get a shot off early’ when sometimes you just pass it past the keeper. I always say the goal never moves.”#MUFC #NEWMUN

Rashford took his time, picked his spot and passed it into the net. Exactly what Solskjaer said he would work on with him, but apparently you can't teach a striker finishing. #plfanzone

This goal shows Solskjaer’s work at the training ground. Talked last week about how Rashford has to just pass it beyond the keeper. Thats what Rash did today. #mufc

Solskjær said Rashford needed to just pass it past the keeper. Today, he did that. If you work to improve your players specifically, they'll improve.

2 months ago Rashford would’ve absolutely smashed that hoping it would go in. Few training sessions and advices from Solskjaer, he’s calmly passing it past the keeper. Just like Ole said they would work on that. Love it.

That Rashford finish had a little bit of Ole in it, pass it in!!

Before today, he has missed up to 8 1 on 1 by just hitting the ball hard without a target.
Incase you dunno, OLE IS WORKING #NEWMUN