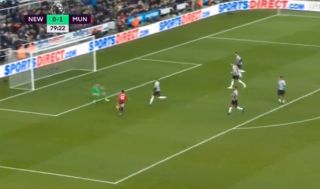 Manchester United have gone 2-0 up against Newcastle to claim what should now be three points from tonight’s Premier League game at St James’ Park.

Watch the Marcus Rashford goal video below as the England international finishes superbly after a neat break by the Red Devils.

The goal comes about after fine work by Romelu Lukaku in the build-up, and a neat final ball from Alexis Sanchez to set him up for an easy finish.

Once again under Ole Gunnar Solskjaer, United look like a new team at the moment and one playing the kind of football their fans have been craving for the last five years…

Rashford makes it 2-0 from a brilliant counter-attack. #mufc pic.twitter.com/z5kVDb2HZp