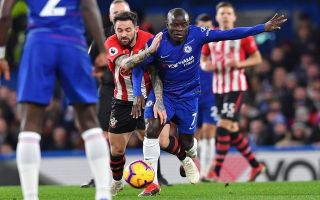 The Blues failed to make their advantage in possession count. The best chance of the half went to superstar Eden Hazard in the 35th minute, unfortunately for the Belgian – Angus Gunn – the Manchester City academy graduate making his Premier League debut wasn’t ready to roll over and allow the Blues to take the lead.

The England Under-21 goalkeeper made a great stop to deny Hazard’s wonderfully timed half-volley from hitting the back of the net.

Take a look at the stats from the first half:

The hosts on top but unable to make possession pay at the break. pic.twitter.com/YR8N0VajGe

Maurizio Sarri will need to ignite some fire into his side, otherwise it looks as though they will fail to overcome relegation candidates Southampton in what is a must-win clash.

The Blues should be winning this game with ease to keep their spot in the top four safe, Arsenal and Manchester United are both creeping towards the Champions League spots and it seems that Chelsea are doing nothing about it.

Check out fan reaction to the dreary 1st half of action:

My dad literally fell asleep watching the first half

Infact our play is very boring lately. Defenders are now providing the key passes. What is the role of Jorginho. I need education about his style of play.

Possession, possession and possesion. Tired of this

First 30 minutes was total garbage. To make Sarriball work we need passing tempo, combinations in the half-space and creativity instead of sideways/backwards passing. We’ve somehow gotten worse as the season has progressed, Fekir needed

No player is fixing this. Style of football is to blame. Sarri too focused on possession. Not allowing players to express themselves or take risks.

i want my 45 minutes back

Doesn’t Sari tell the players that they move the ball too slow…. every game is like this.. Slow sideways passing … its soo frustrating

Chelsea fans are becoming increasingly frustarted with the side’s performances and something will need to change, and quickly, if the Blues are serious about keeping their spot in the top four secure.