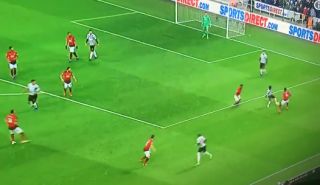 Watch the Pogba video below as the France international failed with a cheeky back-heel pass, giving up possession.

And then just seconds later, the 25-year-old was brutally nutmegged himself by a Newcastle player as the home side managed to clear their lines and break forward.

Pogba has been in fine form under Ole Gunnar Solskjaer, but this was not one of his best moments…