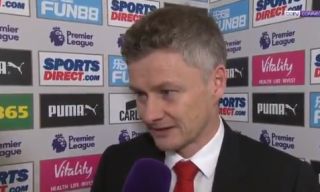 Manchester United’s interim manager Ole Gunnar Solskjaer responded with class when asked about his superb start to life in charge at Old Trafford.

The Norwegian tactician made it four wins out of four today as his Red Devils side beat Newcastle 2-0 – and in doing so became only the second manager in the club’s history to win all four of his opening games in charge.

MORE: Video: Manchester United’s Anthony Martial nearly gets his head smacked off by the ball against Newcastle

Still, when speaking to beIN Sports after the game, Solskjaer refused to take any credit and insisted the big improvement in form is all down to his players.

With the team back to its best and modest interviews like this in contrast to the kind of attention-seeking Jose Mourinho used to try, Solskjaer is fast becoming a very popular man at United.

If this goes on, there will surely be serious talk about the 45-year-old being named permanent manager at the end of the season.