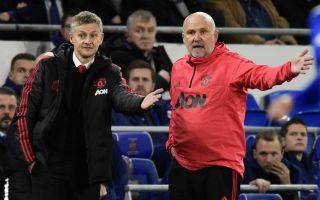 Manchester United interim manager Ole Gunnar Solskjaer has been overheard trying to get the attention of playmaker Juan Mata after a difficult start to the Newcastle game.

The Red Devils have been superb since Solskjaer replaced Jose Mourinho in the Old Trafford dugout, but have found things a little harder at St James’ Park this evening.

Solskjaer has apparently been trying to get the message across to Mata to play wider due to the lack of space in the final third at the moment as Newcastle defend deep.

However, according to Manchester Evening News writer Samuel Luckhurst, the Spanish attacker couldn’t hear his manager.

Solskjaer shouting 'Juan' in an effort to get Mata to pull wider more. Feels it's too congested up top. Mata can't hear him, though. #mufc

It remains to be seen if Solskjaer can change the flow of the game in the way he wants to this evening after this tricky start.

The Norwegian tactician has promising options like Alexis Sanchez, Jesse Lingard and Romelu Lukaku on the bench if he needs them, but for the time being one imagines Mata will be a key creative player for his side.