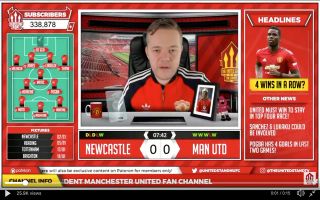 Jonjo Shelvey’s reputation seems to have preceded himself and the midfielder can’t seem to shake off his uncanny likeness to Harry Potter’s rival Lord Voldemort.

One particular United fan was outraged at the sight of Shelvey playing for Newcastle this evening and went on to make a hilarious reference to popular film franchise Harry Potter.

United Stand founder and head honcho Mark Goldbridge suggested that United star ‘Alexis Sanchez should be given a pair of glasses and let Harry Potter f**k Shelvey up.’

Shelvey was the centre of controversy this evening after his disgusting tackle on Manchester United star Paul Pogba became one of the major talking points from United’s 2-0 victory.

In the 72nd minute of the match, Shelvey came in recklessly on Pogba with a high-footed challenge that led to the Frenchman calling for the ex-Liverpool and Swansea ace to be sent off.

Check out what Goldbridge had to say on Shelvey below:

Why isn’t Goldbridge commentating on Sky ????

‘Stick a pair of glasses on Sanchez and let Harry Potter f**k him (Shelvey) up!’ pic.twitter.com/50xEbHwPUz

For those of you who aren’t aware Shelvey has made a name for himself throughout his career for his likeness to Harry Potter’s arch nemesis Lord Voldemort and it seems that the midfielder couldn’t resist the temptation of toying with the dark arts once again this evening.

The magic he learned at Hogwarts certainly seemed to do the trick as he miraculously managed to escape punishment for his horror challenge on Pogba.