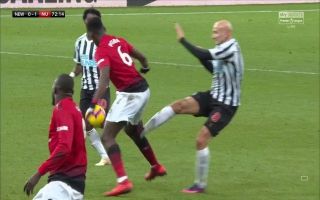 Newcastle United midfielder Jonjo Shelvey was extremely fortunate not to be sent off for a disgusting high-footed challenge on Manchester United star Paul Pogba.

In the 72nd minute of the clash the former Liverpool and Swansea midfielder recklessly came into the back of Pogba’s leg with a disgraceful high-footed challenge.

This kind of challenge is about as clear a red-card as you’ll ever see, to make the matter worse Shelvey came away from the incident without even being shown a yellow card by the referee.

This kind of challenge could have easily led to Pogba suffering a serious injury and Shelvey would have come away from the incident with absolutely no punishment.

With poor decision’s still coming thick and fast across the Premier League – the use of VAR is needed to make sure the league doesn’t lose any credibility.

Check out a video of the challenge below:

How wasn’t this a red card? #mufc pic.twitter.com/lEkrqukUEq

Fortunately for Pogba he was able to continue playing after the horrible challenge.

On a brighter note United caretaker boss Ole Gunnar Solskjaer made it four wins out of four – in doing so the Norwegian matched the record of the legendary Red Devils boss Sir Matt Busby. 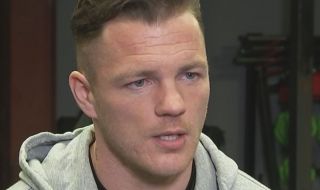