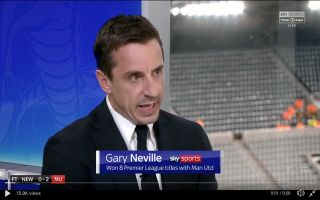 Neville, an eight time Premier League winner with the Red Devils believes that Rashford has “enormous potential” and that the England international has the ability to go on and “devastate teams”.

Rashford has come on leaps and bounds since making his United debut, this season has been challenging for the youngster and it seems as though he has found a new lease of life under caretaker boss Ole Gunnar Solskjaer’s tutelage.

It’s easy to see that Rashford has learned from both the good and bad experiences he had to deal with under Jose Mourinho, the boyhood United fan is a much more well-rounded player now.

Check out what Neville had to say about Rashford below:

"I love him to bits. His potential is enormous" @GNev2 heaps praise on Marcus Rashford after another man of the match display for #MUFC tonight.

Marcus Rashford has scored as many goals in four league games under Ole Gunnar Solskjaer (3) as he did in his previous 14 under José Mourinho this season.

Neville also went on to say that he believes that Rashford could go on to become one of the ‘top strikers’ if he can continue his good run of form:

G Neville: “Marcus has been accused of not being the best finisher, clinical in front of goal, but there was a real ice cold feeling about that and that’s a great sign. If he can start doing that week in week out, Manchester United have one of the top strikers.” #mufc [Sky] pic.twitter.com/l2Qga0xmxK

Caretaker boss Ole Gunnar Solskjaer has been a revelation for the Red Devils so far. The Norwegian has managed to win his first four games in charge, and in doing so has matched a record set by the legendary Sir Matt Busby.