Juventus are reportedly keen to accelerate their efforts to sign Aaron Ramsey from Arsenal and want to secure a deal this month.

The Welshman will see his current deal with the Gunners expire in the summer, and as per the Guardian, after he openly conceded that the club have withdrawn their renewal offer, he has been heavily tipped to move on.

From Arsenal’s perspective, it would seemingly make most sense to sell him in the January transfer window to avoid losing him for nothing in six months time.

However, as of yet, there has been no suggestion that they will sell with Unai Emery suggesting earlier this week that he expects his midfield ace to stay until the end of the season, as noted by the Daily Star.

Nevertheless, as per Calciomercato, it’s now suggested that Juventus might not wait until the summer and will look to try and wrap up a deal for Ramsey this month to bolster their midfield as they are said to be the frontrunners to sign him.

Time will tell if they can reach respective agreements with the 28-year-old and Arsenal to secure a deal, but it could be a welcome boost for them in the second half of the season as they look to continue to dominate domestically and go all the way in the Champions League.

Ramsey could provide key midfield quality and depth, although in contrast, Emery will surely be eager to keep him to help Arsenal in their bid to secure a top-four finish in the Premier League and advance in the Europa League.

In turn, it could prove to be problematic to secure a January agreement, but the report would suggest that Juventus are certainly in prime position to land Ramsey’s signature moving forward ahead of the competition.

As seen in the image below from the front-page of Corriere dello Sport on Thursday, it’s clear what Juve’s reported intentions are for the Welsh international, and that’s an immediate signing in January if possible. 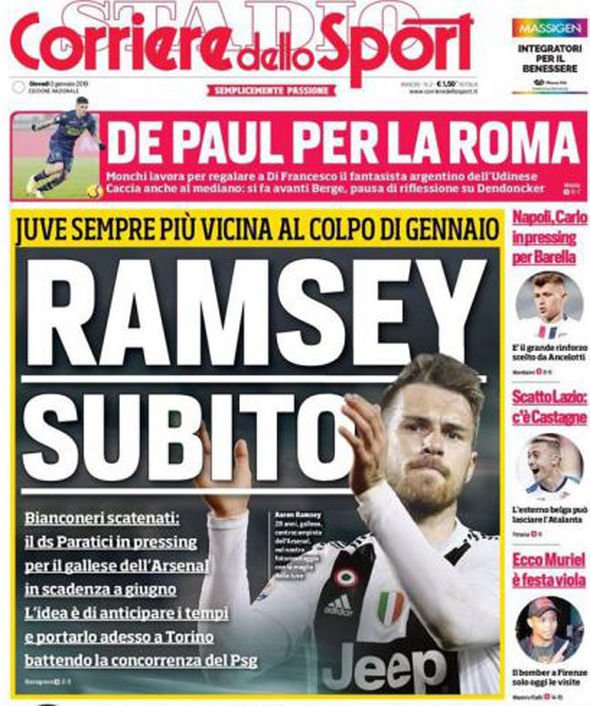