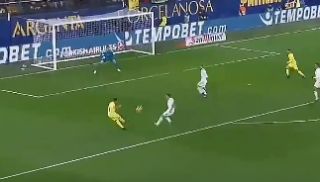 The veteran Spanish playmaker left the Gunners in the summer but has enjoyed a new lease of life back in La Liga, despite his age and recent injury record.

Cazorla was undoubtedly a top performer for Arsenal at his peak, but it’s good to see him still influencing games at this level.

You mean to tell me Cazorla left Arsenal an he’s still scoring goals like this vs Real Madrid. Class is permanent pic.twitter.com/aNIGqIESH2