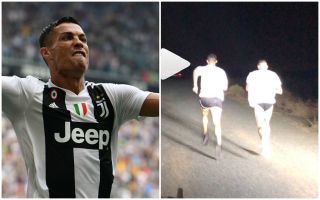 It may be the winter break in Italy, but Juventus superstar Cristiano Ronaldo clearly doesn’t believe in taking a break from his training regime.

The 33-year-old has enjoyed an impressive start to life with the Turin giants so far this season, bagging 15 goals and eight assists in 24 appearances.

That in turn has helped them move nine points clear at the top of the Serie A table, while they advanced to the knockout stage of the Champions League.

The Bianconeri aren’t in action again until January 12, with Ronaldo perhaps even likely to be rested for the Coppa Italia clash with Bologna given that they face AC Milan for the Italian Super Cup in Jeddah just four days later.

Nevertheless, Ronaldo is clearly taking his winter break very seriously, as while he spends time with his family on holiday in Dubai, he posted a video on Wednesday night showing him and the gang on a late night run through the desert.

It’s that type of mind-set and attitude that sets him apart from many others to remain one of the best players ever to play the game. Juve will be hoping that he returns in good shape and is ready to lead their charge for more major honours in the second half of the campaign…