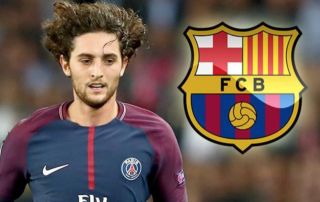 Adrien Rabiot’s agent is reportedly set to arrive in Barcelona this week in order to try and thrash out a deal for the Paris Saint-Germain ace to move this month.

The 23-year-old will see his current contract expire at the end of the season, and having opted not to sign a renewal with PSG, he has since been frozen out by coach Thomas Tuchel and the club, as noted by ESPN.

In turn, rather than spend the next six months sitting on the sidelines and not playing, his agent, who is also his mother, is reportedly set to fly to Barcelona this week to try and negotiate a deal with the Catalan giants, as per Mundo Deportivo.

It seems like the most appropriate resolution for all parties concerned, but ultimately it will seemingly hinge on the relevant agreements being reached now as opposed to discussing a free transfer in the summer.

There’s little doubt that the French international would be a key addition to the Barcelona line-up, given his technical quality and creative abilities would arguably make him an ideal fit for the midfield and style of play at the Nou Camp.

Nevertheless, it remains to be seen if a move to Barcelona materialises either in January or the summer, with his agent evidently eager to secure an agreement sooner rather than later.

The Spanish champions added Arthur to their squad last year, but with club stalwarts such as Sergio Busquets and Ivan Rakitic as well as recent signing Arturo Vidal on the wrong side of 30, long-term solutions will be needed and Rabiot could also tick that box given he’s still only 23.

No exit: Juventus star not leaving this summer as he looks ahead to Pirlo link-up