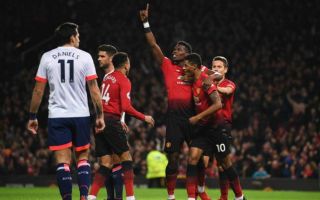 Man Utd face Reading in the third round of the FA Cup this weekend, and Ole Gunnar Solskjaer has provided some insight into his likely starting line-up.

The interim United boss has enjoyed a fine start to life at Old Trafford with four consecutive wins, as he now looks to ensure that they advance in the FA Cup.

Given the busy fixture schedule in recent weeks though, it could also be seen as an opportunity for him to rotate his squad and give others a chance to impress.

However, as noted by ESPN, he confirmed in his press conference on Friday ahead of the encounter that both Romelu Lukaku and Alexis Sanchez will start as he looks to give them playing time to help with their full recovery from injury.

“Lukaku and Sanchez will start. That’s important for them because they need more game time,” he said.

Given the lack of playing time that they’ve had in recent weeks, it seems like a sensible decision and so time will tell if the pair are able to make the most of their opportunity and make a strong case to remain in the line-up under Solskjaer moving forward.

It’s not all positive news though as the Norwegian tactician added that Paul Pogba is likely to sit out after picking up a problem against Newcastle United last time out following a tackle from Jonjo Shelvey.

“I’m not sure if Paul is going to be ready. He got a knock against Newcastle,” he added.

Solskjaer could opt to avoid risking him and aggravating the problem, with a crunch clash with Tottenham to follow next weekend.

Pogba has rediscovered his best form under his current boss, bagging two goals and three assists in the four games since Solskjaer took charge. In turn, he’ll likely be fundamental to their hopes of maintaining their impressive run.