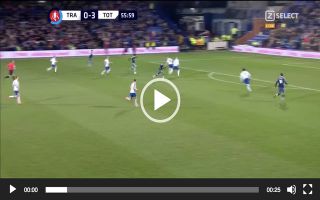 Tottenham superstar Harry Kane came off the bench to make it a magnificent seven for Spurs in their FA Cup clash against Tranmere this evening.

In the 82nd minute of the FA Cup tie, Dele Alli threaded through an inch-perfect pass to Kane who produced an effortless finish that lobbed Tranmere’s helpless goalkeeper.

Kane produced a deftly executed chip from a tight angle to lob Tranmere’s on-rushing goalkeeper. The decision to bring Kane on when the North London outfit were already six goals ahead surprised many fans.

The England captain used this match as the perfect opportunity to sharpen his tools ahead of Tottenham’s crucial encounters against Chelsea and Manchester United that are coming up next week.

Check out a video of Kane’s goal below:

Tottenham are third in the Premier League, in the semi finals of the Carabao Cup and have more or less advanced to the next stage of the FA Cup.