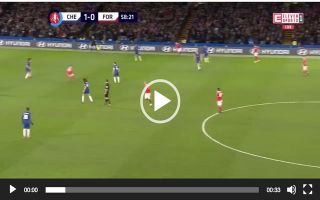 There may be no other players in the whole of world football that are like Alvaro Morata. The Spaniard’s constant battle between hero and zero for Chelsea is truly amazing.

Only moments after Morata sent the ball sky-high from just in front of goal, the Spaniard managed to make up for his woes by scoring his second of the afternoon.

In the 59th minute of the FA Cup clash, talented young winger Callum Hudson-Odoi once again turned provider for the hit and miss striker. Hudson-Odoi managed to work his way past two Forest players before sending in a floating cross into the box.

Morata rose above makeshift centre-back Claudio Yacob to head the ball into the back of the net.

Here’s a video of Morata’s miss below:

It's Offside! But how in hell #Morata miss this one ? #CHENOT #CFC #Chelsea pic.twitter.com/GFx9wV7osv

Check out a video of Morata’s second goal of the afternoon below:

Morata’s last goal for the Blues came in a Europa League tie almost five weeks ago, fans will be hoping that they won’t have to wait as long for Morata to score after his performance this afternoon.

The chances of Maurizio Sarri winning silverware in his debut season in charge seem to be increasing.

After Morata’s double the Blues look all set to progress through to the next round of the FA Cup and they are also within touching distance of League Cup glory.