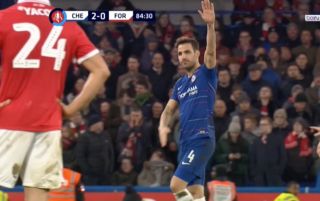 Cesc Fabregas was given a classy, emotional send-off by Chelsea fans during their match against Nottingham Forest in the FA Cup this afternoon.

As per Sky Sports, it’s set to be the Spaniard’s last ever game for the Blues, as his move to Monaco edges ever closer to completion.

Fabregas has been a fine player for Chelsea ever since he moved to the club from Barcelona in the summer of 2014, and we’re sure fans of the club will be sad to see the Spaniard leave in the very near future.

Fabregas contributed a fair bit to the two Premier League titles, League Cup and FA Cup that the club won during his time with Chelsea, something Blues fans will forever be thankful for.

A video of Fabregas’ standing ovation can be seen below. Emotional scenes at Stamford Bridge this afternoon…

One of the best midfielders in the league?pic.twitter.com/w2fIWqwnT6