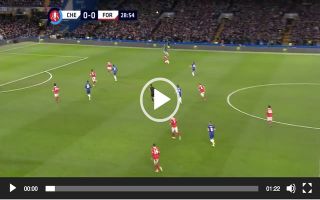 Chelsea had a glorious opportunity to take the lead in their FA Cup tie vs Nottingham Forest this afternoon after some excellent work by Ruben Loftus-Cheek won them a penalty.

In the 29th minute of the clash a wonderful touch from Loftus-Cheek forced Forest defender Danny Fox to bring down the England international in the box. The referee ignored Forest protests and rightly pointed to the spot.

Then came the chance for Cesc Fabregas to score at Stamford Bridge in what is expected to be his last game for the Blues, according to Sky Sports the Spaniard will join Monaco during this transfer window.

Fabregas’ mind might have already been in Monaco when he stepped up to take the penalty.

The Spaniard’s decision to attempt a dummy fooled Forest keeper Luke Steele at first, but the fact that Fabregas’ dummy was so extended and pronounced allowed Steele enough time to crouch up from the floor and push Fabregas’ penalty away.

Check out a video of incident leading to the penalty and Fabregas’ miss below:

Fabregas will go down as one of the best attacking midfielders to ever play in England and it’s a shame that his farewell hasn’t gone to plan so far.