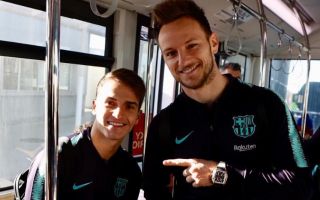 Barcelona midfielder Ivan Rakitic has posted a photo of himself and Denis Suarez appearing to travel to their next La Liga game.

This comes as Sky Sports suggest a deal is close for the Spanish midfielder to leave the Nou Camp for a January transfer to Arsenal.

MORE: Unai Emery hints at plan for Denis Suarez as he closes in on Arsenal transfer

However, with Rakitic posing with Suarez today, it seems a move may not be as far along as reports suggest, as he is perhaps set to play a part in Barca’s match against Getafe this evening.

Then again, things can change quickly in January, so there may well still be time for the 25-year-old, who celebrates his birthday today, to leave his current club’s squad and make a trip to London if necessary.