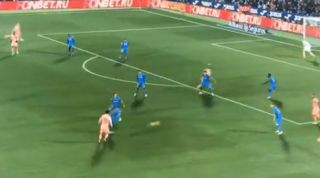 Barcelona superstar Lionel Messi is at it again doing things that just don’t look physically possible on a football pitch.

Yes, he scored against Getafe this evening, but it’s this pass below that has everyone talking.

Messi somehow beats about five defenders with an incredible reverse through-ball to Luis Suarez, who ruins it by not being Messi on the other end of the pass.

Messi just did a pass that doesn’t make any sense and now we don’t know what anything means pic.twitter.com/QhqG4zYnbR

RT FootbaII_HQ: Lionel Messi just did this. This is a crazy pass. He is a freak ? pic.twitter.com/Ih2zPOpHqS

Messi is a freak, what a pass