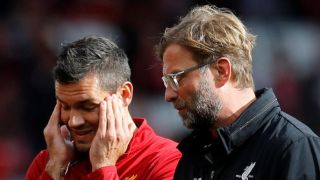 According to the Liverpool Echo, the teenager could be in line for a debut against Wolves in the FA Cup after a remarkable rise in recent times.

Klopp has also been quoted in the Echo’s piece as heaping praise on Hoever, though he admits it is injuries to Joe Gomez and Joel Matip that have forced him to consider him at all.

Still, this could be music to the ears of many Liverpool fans as it means the club have an exciting young talent potentially ready to soon force Dejan Lovren out of the first-team picture.

The Croatian was not at his best in the defeat against Manchester City in the Premier League this week, and has long looked a bit of a liability in this squad.

Since Gomez’s injury, Lovren has had to play more, so the Reds could definitely do with a wonderkid making his way up now, even if it’s a big ask for him to be ready just yet.

Klopp, however, is clearly a fan, saying: ‘He (Hoever) is one for the future of course, but what we will do with him now I don’t know.

‘He is 16, turns 17 in a few days. If Joel and Joe would have been fit all of the time, then probably Ki-Jana wouldn’t have been in training with the first team, but he was in and is still in.

‘It is just a joy to watch him. He is an incredible, confident young fella and is really a good player on top of that. It’s nice we can see him day in, day out. It’s really cool.

‘He is for sure for the future, but when the future starts I don’t know. But he is in and he learns a lot and improves a lot, it will happen automatically.

‘It’s a nice prospect for the next months and years. Wolves? I don’t know, we will see.’