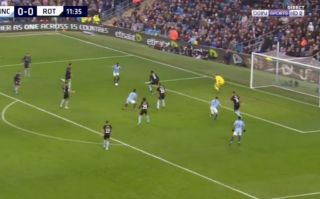 Raheem Sterling was on hand to score for Man City this afternoon, as the winger handed the Citizens a 1-0 lead in their FA Cup clash vs Rotherham at the Etihad.

The goal came after a swift one-two Sterling and Kevin De Bruyne saw the England international pick up the ball close to goal, as he shifted the ball onto his right foot before firing home to hand the home side the lead.

Sterling’s goal can be seen below. Fantastic composure from the former Liverpool man!

KDB plays in Raheem Sterling who finishes to make it 1-0 City!pic.twitter.com/7L1vACClPl

Sterling goal! What a pass by De Bruyne! ? pic.twitter.com/8FRtvMWWsg