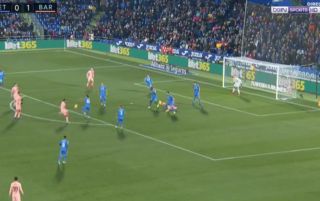 Luis Suarez scored an absolutely thunderous volley for Barcelona this evening to hand the Blaugrana a 2-0 lead vs Getafe in La Liga.

Lionel Messi had given Barca the lead earlier in the match from a tight angle, with Suarez putting Ernesto Valverde’s side firmly in the driving seat with his volley seven minutes before half time.

Suarez, who had been fairly quite in the match up until this point, latched onto a headed clearance just outside the box, as the Uruguayan thundered his volley home to give Barcelona a two-goal lead.

You can catch Suarez’s goal below. What a hit from the forward!

His fine finish has put Barcelona 2-0 up against Getafe! #LaLiga pic.twitter.com/Bo6qEDsREx