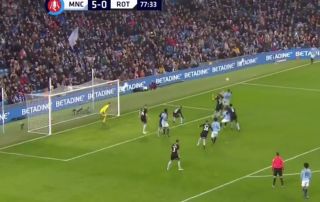 Nicolas Otamendi scored a thumping header for Man City this afternoon to hand them a 6-0 lead against Rotherham in their FA Cup tie.

The goal came after a corner into the box from Ilkay Gundogan met the head of Otamendi, who powered his effort home to pile the misery on their opponents even further.

The goal also meant that Gundogan bagged a hat-trick of assists, as the German had already set up both Phil Foden and Riyad Mahrez earlier in the match.

You can catch Otamendi’s header below. The power on that!