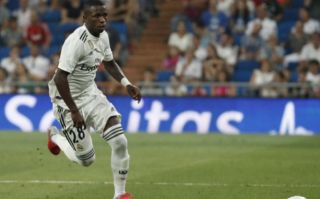 Teenage sensation Vinicius Junior will make history for Real Madrid in their La Liga clash against Real Sociedad by becoming the first Madrid player to achieve this feat.

Brazilian winger Vinicius will become the first player who was born in 2000 or later to make a La Liga start for Los Blancos, this shows that Madrid boss Santiago Solari is serious about developing Madrid’s next generation of potential superstars.

Vinícius Júnior is the first player to start a La Liga game for Real Madrid born in 2000 or later.

Rewarded for his efforts at the Club World Cup. ? pic.twitter.com/gLQ4tnhdrO

Vinicius has been tipped to go on and become a superstar of world football and the teenager will have to show that he has what it takes to rise to the occasion tonight when he starts his first La Liga game.

The 18-year-old could prove to be the player that Madrid have been crying out for, the youngster is well-known for his willingness to take on defenders.

The Brazilian has the talent to surprise Sociedad’s defenders and we know one thing for sure and that is that he’s certainly got a whole host of tricks up his sleeve that he’ll be raring to use.

Real Madrid have turned around a disastrous start to the season since Solari has taken the reigns at the Bernabeu.

Solari’s men currently sit in fifth place in La Liga, and a win against Sociedad this evening will push them into fourth place.