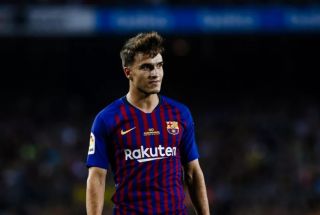 Arsenal have been linked with a swoop for Barcelona ace Denis Suarez, and should a deal be done it has raised question marks over Henrikh Mkhitaryan’s future with the Gunners.

As noted by The Guardian, Arsenal are said to be in talks over a potential move for the £20m-rated midfielder as he continues to struggle to establish himself in Ernesto Valverde’s plans.

While such a move would make sense for him, it remains to be seen what potential impact his arrival would have for others currently in the Gunners squad.

According to The Sun, it would raise question marks particularly over Mkhitaryan, who has struggled to produce his best form since joining the Gunners a year ago.

The 29-year-old has scored four goals and provided three assists in 20 appearances so far this season, but given Unai Emery knows Suarez from his time in charge at Sevilla, the Spaniard could be better suited to his ideas and the way in which he wants his side to play.

Emery will undoubtedly continue to stamp his mark on the squad in the upcoming windows, but it remains to be seen whether or not a deal can be reached with Barcelona over the signing of Suarez.

Should he arrive, Mkhitaryan, and others for that matter, may well start to feel additional pressure to perform to not only keep their place high up on the pecking order in Emery’s plans, but also to ensure that they have a future at the Emirates and aren’t relegated to a bit-part role.

As noted by the Metro, it’s suggested that Suarez himself is keen on the move, and so a January deal could be forthcoming if the two clubs can reach an agreement.