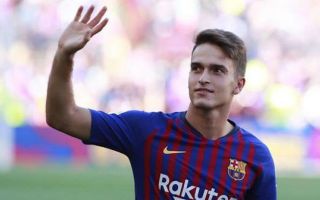 Arsenal could reportedly struggle to get a January transfer window deal for Denis Suarez done, according to latest reports on the Barcelona midfielder.

The 25-year-old has been linked strongly with the Gunners in the last few days, with Sky Sports suggesting a deal looks close for him to move to the Emirates Stadium this winter.

However, the latest from the Daily Mirror is that Barcelona are now playing hardball over the player following Arsenal getting in touch with his representatives.

Arsenal are said to be hoping they can land the Spain international on an initial loan this season before making his move permanent in the summer.

Still, it may be that Barca end up deciding to keep him after all, which might not be the worst thing for Arsenal anyway.

Many could argue that the north London giants could be aiming higher anyway with regards to their transfer targets at the moment.

Suarez has barely played at Barcelona and at the age of 25 might not have much more room to improve, meaning he probably wouldn’t be up to the job at Arsenal.

Unai Emery urgently needs quality midfielders as Aaron Ramsey nears the end of his contract, while Jack Wilshere left the club in the summer.