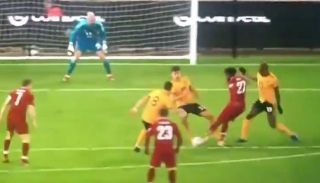 Liverpool forward Divock Origi has struggled for playing time this season, but he took his opportunity against Wolves in their FA Cup clash on Monday night.

The 23-year-old has been limited to just three appearances so far this season, with competition for places fierce at Anfield, particularly in the final third.

However, Jurgen Klopp handed him an opportunity to impress at Molineux, naming the Belgian ace in his starting line-up to face Wolves.

After the hosts had taken the lead in the first half through Raul Jimenez, Liverpool wasted little time in producing a response after the break, as seen in the video below.

Origi created some space for himself on the edge of the box and hammered home a brilliant finish to find an equaliser for the visitors.

Unfortunately for Klopp, the response was met with one from Wolves as Ruben Neves restored their lead just minutes later with a thunderous effort of his own from distance as the two Premier League sides produced a memorable cup tie.