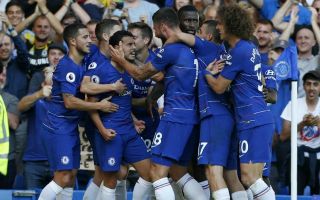 Chelsea duo Alvaro Morata and Cesc Fabregas both look ready to seal transfers away, but both deals are being held up by their club.

The Spanish pair no longer look regular parts of the first-team set-up at Stamford Bridge, and it makes sense that they could both leave in order to play more football.

According to Goal, Morata’s agent has held talks with Sevilla, who are ready to meet his contract demands as he looks for a return to La Liga, suggesting there is essentially an agreement in place.

What’s holding that deal up, however, is largely Chelsea’s desire to ensure they sign a replacement for the 26-year-old before allowing him to move on, according to Goal.

CFC would certainly be left a little light up front if Morata were to leave now, even if he hasn’t been at his best in his time in west London.

Fabregas, meanwhile, has agreed terms with Monaco, but the two clubs are yet to agree on a fee, with Chelsea not prepared to let the 31-year-old leave for free, according to the Evening Standard.

The Blues will hope both of these departures can be settled soon as they would surely be in a better shape after January with two or more new players in to replace them.