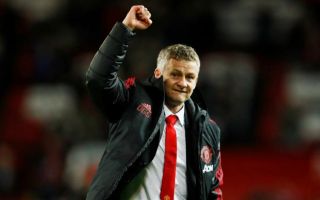 The Frenchman was forced to sit out the win over Reading in the FA Cup last weekend after picking up a knock against Newcastle United the previous week.

The United squad have since travelled to Dubai during their mini break in the season, although the club noted in an official statement that Pogba joined up with his teammates a little later as he initially remained behind to continue his recovery from injury.

Man Utd take on Tottenham at Wembley on Sunday evening, with Solskjaer hoping to make it six consecutive wins in all competitions since replacing Jose Mourinho at the helm last month.

Coupled with the fact that his influential midfielder has scored four goals and provided three assists in the four Premier League games under his stewardship, it’s clear as to why United will be desperate to have him back available.

“Paul [Pogba] has had his knock and has had a few days of treatment back home. Hopefully, we can get Paul on his feet during this week,” he is quoted as saying by the club.

As seen in the image below from freelance injury analyst Ben Dinnery, Pogba featured in training on Tuesday and so it looks as though he is making progress in his recovery from the setback.

Nevertheless, the Red Devils will surely avoid risking the 25-year-old and aggravating the problem, particularly with their FA Cup fourth round clash against Arsenal still to come at the end of the month.

Pogba took part in his first session after joining up with the squad in Dubai. Rojo “is taking a bit longer than we thought” confirmed Solskjaer and the Argentine has returned home. Fred did not travel as his partner is expecting a baby. Smalling steps up his recovery #MUFC pic.twitter.com/jzRLohfrE5