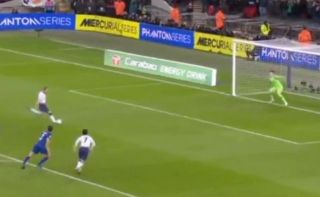 Harry Kane made no mistake from the penalty spot as he gave Tottenham the lead against Chelsea in their League Cup clash at Wembley on Tuesday night.

There was an intriguing start to the encounter as both sides looked threatening going forward without finding a breakthrough.

However, after Kane beat the offside trap and was brought down by Kepa Arrizabalaga in the box, the England international stepped up and slotted home his penalty, as seen in the video below.

Nevertheless, VAR was required to reach the decision to award a spot-kick, as initially the linesman had flagged Kane for being offside.

Following an intervention from the officials watching on and a discussion with referee Michael Oliver, the penalty was given and Kane made no mistake.

As seen in the tweet below, the 25-year-old also made a bit of club history with his latest effort, becoming the first player for Spurs to score 20 goals or more in all competitions in five consecutive seasons.

Drama at Wembley! VAR is used to clarify firstly that Kane was onside and secondly that he was fouled. Kane emphatically dispatches the penalty.

?? Harry Kane is the first player in Tottenham’s history to score 20 goals in all competitions in 5 successive seasons pic.twitter.com/lHV99qlols