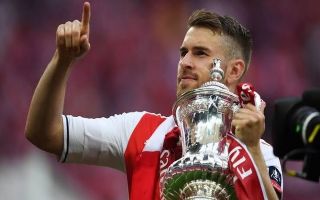 Arsenal midfielder Aaron Ramsey has agreed to a bumper deal with Juventus, the Welshman will join the Italian giants once his contract expires with the Gunners in the summer.

According to The Guardian, the Welshman will sign a deal that is worth a whopping £36m over five years. This equates to £140,000 a week. The 28-year-old will become the Turin club’s second highest paid player, behind only Cristiano Ronaldo.

Juventus are cementing themselves as a force to be reckoned with in Europe, in addition to their stacked attack of Ronaldo and Paulo Dybala, the ‘Old Lady’ will add Ramsey to their already frightening midfield of Blaise Matuidi and Miralem Pjanic.

The fact that Juventus have been courting Ramsey for months proves to Premier League fans that the midfielder is one of the most underrated stars in the league. He will be a huge miss for the Gunners.

There is no doubt that Ramsey will go down as an Arsenal legend, the Cardiff City academy graduate has certainly left his mark on English football during his decade-long spell with the Gunners.

Here’s a look at Ramsey’s career at Arsenal:

With some spectacular goals along the way. pic.twitter.com/GwNGzPKOuj

Will the Gunners rue their decision not to award Ramsey a new contract?