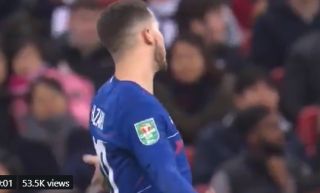 Harry Kane scored the winner to give Spurs a 1-0 advantage going into the second leg in two weeks’ time, and it was another unconvincing display from Maurizio Sarri’s side on the whole.

Alonso was one player commonly targeted for abuse by angry Chelsea fans after the game as we noted in our round-up here, and it seems Hazard shares those frustrations.

Tell me he ain’t had enough of him.. pic.twitter.com/oDqXXjKX7f