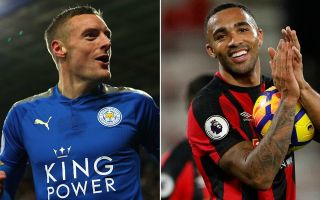 Chelsea are reportedly still considering their options up front in this January’s transfer window, with the likes of Jamie Vardy and Callum Wilson on their radar despite strong links with Gonzalo Higuain.

According to Chelsea reporter Simon Phillips, a deal for Higuain is not as far along as has been suggested by some media outlets.

Spanish source Marca claim the Argentina international is closing in on a move to Stamford Bridge, but it could be that there are still a couple of twists to this tale.

Phillips says in his tweet below that the Blues are also looking at big names like Edinson Cavani and Karim Benzema, along with some Premier League-based players.

Leicester City front-man Vardy is one of the options mentioned, as is Bournemouth ace Wilson, along with West Ham’s Marko Arnautovic, who has already been the subject of an enquiry by the club.

The Telegraph have also recently linked Vardy with Chelsea, and the former England international could be a superb short-term option for the west London giants.

Still one of the quickest and most clinical forwards in the top flight, Vardy would surely be an instant upgrade on players like Alvaro Morata and Olivier Giroud.

Wilson and Arnautovic are perhaps less convincing options than someone like Higuain, though fans would likely not be too picky.