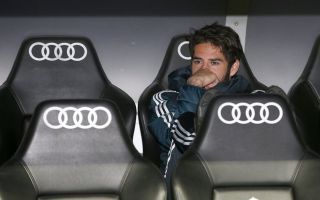 Wantaway Real Madrid star Isco has landed himself in hot water by liking a tweet that criticised Los Blancos boss Santiago Solari prior to the clash against Leganes this evening.

Real Madrid superstar Isco has failed to win over Santiago Solari since he took over at the Santiago Bernabeu and it seems like the Spain international is sick of starting Madrid’s matches on the bench, the attacking midfielder liked a tweet criticising his manager’s decision to start out-of-form stars Dani Ceballos and Casemiro.

Isco’s most recent antics will put some of the world’s biggest clubs on red alert, it’s clear that Isco is disappointed with his reduced role within the team. According to a report from The Guardian, Manchester City are interested in a move for Isco. A report from the Metro also suggests that Italian giants Juventus are in the running for Isco’s signature.

Isco likes this tweet, then quickly unlikes it after: “Solari plays Ceballos, a Casemiro who is out of form. He’d even start himself even though he retired 20 years ago before he would start Isco.” pic.twitter.com/0TP6HQ98LL

Isco’s future at Real Madrid looks all but over and unless a move materialises in January, the playmaker will have to get comfortable in his seat on the Los Blancos bench.