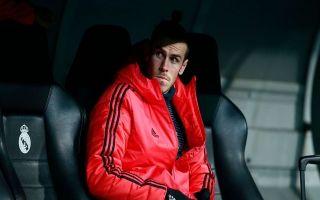 Gareth Bale has become the exact opposite of a fan favourite at Real Madrid in recent months, the Welshman has angered the Madrid hierarchy by doing this during Los Blancos’ shock loss against Real Sociedad.

According to Mirror Football, Bale is set to be fined for deciding to leave the Santiago Bernabeu before the end of Madrid’s shock 2-0 defeat to Real Sociedad on Sunday.

Bale was watching his teammates from the stands, as he was ruled out of the clash with his 22nd injury during his spell in the Spanish capital. The Welshman has earned himself a nickname that he could struggle to shake off, as a result of his latest injury woes. Check out Bale’s unflattering nickname here.

The report highlights that Bale decided to leave the Bernabeu in the 78th minute of the clash, just five minutes before Sociedad wrapped up the tie with their second goal of the evening.

Bale was even pictured driving away for the stadium, which will anger Madrid fans even more:

Gareth Bale left the Santiago Bernabéu on the 78th minute of the game. [El Chiringuito] pic.twitter.com/rZ2H2XHvkj

Bale had the perfect chance to take the mantle as Madrid’s main man this summer, following the shock exit of Cristiano Ronaldo to Juventus. The Welshman has so far failed to even get himself on the pitch enough to stake his claim as Madrid’s best player this season.