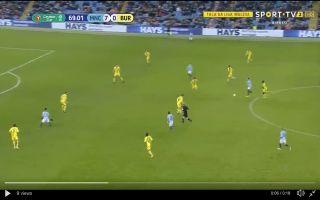 There was goals galore at the Etihad Stadium this evening and right-back Kyle Walker even managed to get himself on the scoresheet in the Carabao Cup clash.

Walker scored City’s 8th goal of the evening in the 70th minute of the clash after some great work from Riyad Mahrez. The former Leicester star sent a inviting low cross into the box and Walker produced a great first-time finish to get himself on the scoresheet.

Walker has been criticised in recent weeks and a goal this evening will do him a world of good as he looks to get back to his best for Pep Guardiola’s side.

After tonight’s masterful performance, City have nothing to worry about in the second leg of the clash.

Check out a video of Walker’s goal below:

Manchester City will meet either Tottenham or Chelsea in the Carabao Cup final.