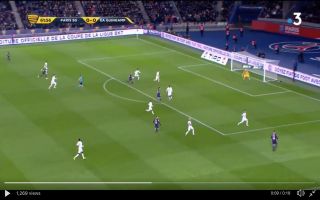 PSG superstar Neymar managed to do something that he’s never done before for the French giants this evening in their French League Cup clash against Guingamp.

In the 62nd minute of Paris Saint-Germain’s quarter final clash, the samba superstar scored a rare header to give the Parisians the lead. The 26-year-old made a well-timed run into the box before meeting Thomas Meunier’s cross with an excellent header which flew into the back of the net.

Fans should make a note of Neymar’s feat for the French giants tonight as there could some time before we see another headed goal from the superstar.

Check out a video of Neymar’s goal below:

70 – Neymar has been involved in 70 goals in all competitions with Paris in 51 games played since August 2017 (46 goals, 24 assists), with his first headed goal with PSG all comps. Monstrous. @PSG_English #PSGEAG pic.twitter.com/ZBtI5B6MtU