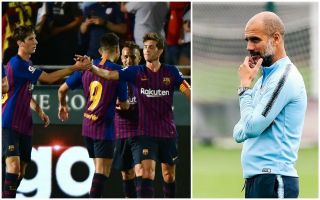 The 19-year-old is one of the most exciting young talents in the Premier League at the moment after becoming a key player for the Hammers in recent times.

It’s easy to see why big clubs like City are rumoured to be in for him, with the Metro also recently linking the teenager as a target for both Manchester United and Chelsea.

United in particular could do with a long-term Michael Carrick replacement and upgrade on players like Nemanja Matic and Fred, while Chelsea may also benefit from more options in that position due to Mateo Kovacic only being on loan at Stamford Bridge for this season.

Still, the latest is that City boss Guardiola is eager to sign Rice, with the Sun claiming he will personally keep close tabs on the player for the rest of this season with the view of a summer swoop.

The report suggests West Ham would ask for around £50million for Rice, which could end up being a bargain in the long run as he already looks one of the most commanding defensive midfield players in the country.

City could arguably not do any better in their bid to bring in a long-term replacement for the ageing Fernandinho.