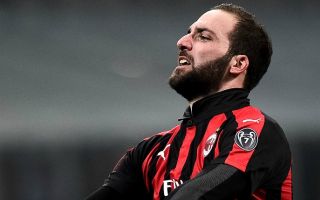 Gonzalo Higuain’s transfer to Chelsea could be about to take a significant step forward as he could try to force his way out of AC Milan.

The Argentina international, who is on loan at Milan from Serie A rivals Juventus, is said to be frustrated with club chief Leonardo.

This is according to Corriere dello Sport, as translated by Chelsea reporter Simon Phillips on Twitter, who also tweets of news from Gazzetta dello Sport that Higuain’s brother and agent is in London as speculation hots up over the 31-year-old moving to Stamford Bridge.

Whilst Corriere Dello Sport report that Higuain is furious with Leonardo, and that he is close to breaking his loan contract with Milan, in order join Chelsea.

Higuain would be a fine signing for Chelsea to replace Alvaro Morata, who has majorly flopped at Stamford Bridge since his move to England from Real Madrid last season.

The Independent are one of a number of outlets reporting on Morata’s potential departure as clubs like Sevilla and Atletico Madrid show an interest in him.