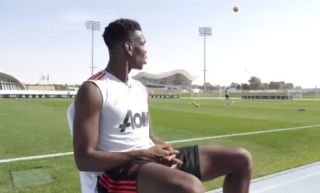 Manchester United star Paul Pogba produced a sublime piece of skill as someone launched a ball at him during an interview.

The France international remained cool as a cucumber as the ball made its way over to him while he was sitting down and chatting during a break from training.

Just watch this lovely touch from Pogba as he controls the ball with the outside of his foot with minimal fuss.