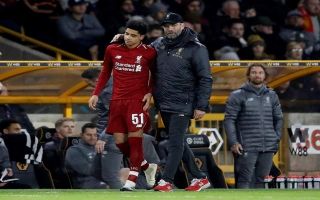 Liverpool youngster Ki-Jana Hoever instantaneously became a Reds fan favourite after his impressive debut against Wolves, Liverpool fans will love to hear what else Hoever has been up to.

The 16-year-old was tasked with marking Liverpool’s main main Mohamed Salah on his first visit to Melwood, it’s understood that the Dutch starlet impressed Liverpool’s senior pros with his handling of the Egyptian superstar so much so that he’s trained with the first team ever since.

Given Liverpool’s injury crisis in defence, the youngster was named on the bench for Monday evening’s FA Cup clash against Wolves. With Dejan Lovren suffering an injury in the early stages of the game, the ex-Ajax academy star was given the chance to make his debut for the Reds.

Hoever made history on Monday evening by becoming the youngest ever player to feature for the Reds in the FA Cup:

? Youngest ever Liverpool player to feature in the FA Cup
? Third youngest in Liverpool history

The 16-year-old used his debut to show fans that he fits the bill of a modern defender with his composure on the ball:

"It is just a joy to watch him. He is an incredible, confident young fella and is really a good player on top of that.”

When a 16-year-old centre back does this on his debut ?? pic.twitter.com/ZTtj4FjiFG

Hoever certainly has a bright future ahead of him and the Liverpool faithful will be hoping that the Dutch starlet gets some more opportunities to impress this season.