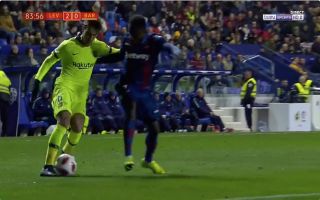 Arsenal transfer target Denis Suarez went on a dazzling run for Barcelona this evening, forcing Levante’s helpless defenders to bring the Spaniard down in the box.

According to Spanish publication Marca, the creative midfielder is interested in making a move to the the Emirates Stadium, the 25-year-old is clearly keen on a reunion with Unai Emery – Emery managed Suarez at Sevilla.

In the 83rd minute of Barcelona’s 2-1 defeat to Levante this evening in the first leg of their Copa Del Rey fifth round tie, Denis Suarez showed off his talents to potential suitors, Arsenal, by expertly nutmegging one of Levante’s defenders before going on to twist and turn two Levante defenders before he was brought down in the box.

Former Liverpool star Philippe Coutinho converted from the spot to give Barcelona some confidence heading into the second leg of the cup tie.

Check out a video of Suarez’s dazzling run below:

These Arsenals fan called for the club sign Suarez up immediately after seeing his fantastic run:

After watching Denis Suarez for 25 minutes I can confirm he’s the best Suarez in the world. He won a penalty with this run. Sign this baller @Arsenal

Suarez can operate anywhere across midfield, but Emery may be eyeing the Spaniard as an option for the wing:

Denis Suarez winning a penalty for Barca tonight and showing why Unai Emery likes him as a winger pic.twitter.com/0oGSvOoDxS

Denis Suarez could certainly add some quality to Arsenal’s midfield and with Aaron Ramsey’s contract expiring in the summer, the Gunners are desperate for another creative spark from the middle of the park.